Just a little about myself.

I became “hooked” on fishing when I caught my first King or Chinook salmon at age 8. Right after my tour in Viet Nam I began commercial fishing, got my charter boat license, and was off and running. I also got lucky and found a job that I could drive a fire truck two days a week and fish 5. I did this for 26 years.

To my great surprise I found out how much the corporate market loves to fish! They made up 90% of my business most years. I have had the enjoyment of guiding people from many walks of life including Presidential cabinet members, Senators, Congressmen, Governors, and Hall of Fame professional athletes.  But the vast majority are just like you and me, good people who enjoy fishing and the beautiful outdoors of the Oregon coast.

After all these years I still do this because I love fishing,  I love the beauty of this place, and I love the people I get to meet.

Writing this is not easy for me as I don’t believe in “Tooting my Horn”. I let my actions speak for me. A few of my clients have said a few words, as you can see. We have been featured on several nationally shown TV shows, Americas Outdoors Journal, Western Extreme and Mid West outdoors.

These have shown on ESPN, TNN, Fox and the Outdoor Channel. We have also done over 30 TV spots for local TV , KATU, KGW and Travel Oregon.

“John Krauthoefer’s Firefighter’s Guide Service has been my “Go To Guide” for more years than I can remember.

It is safe to say we’re about to wrap up our second decade of fishing trips together and that includes varied fishing trips to rivers across the region for many different fish species too.

We have successfully fished for spring and fall salmon @ Tillamook and Nehalem Bays, summer salmon in the Columbia River and the Pacific Ocean – plus winter steelhead in the Nestucca and Nehalem Rivers systems and even a halibut trip or two thrown in for good behavior.

There’s a reason we have logged more than 50 trips together –– we keep going back to John because he’s among the best!

We certainly catch fish and enjoy our time with him, but that’s only part of the story. More importantly, John knows his business so well and can talk about the tactics and techniques so easily, it’s always a pleasure to join him and I certainly learn something new each time we head out together too.

As a reporter who has covered Oregon’s Great Outdoors for nearly thirty years at KATU-TV and KGW-TV, I have always believed it’s critical that our stories teach anglers how to catch the premier game fish in Oregon.
John is a knowledgeable and patient teacher who has shown the way and delivered the fish more times than I can count.

He’s a solid fishing guide who’s built a career and reputation on proven success based on a lifetime of fishing in Oregon. He provides the best service, tackle and gear that guarantees all of his clients have a wonderful time on the water.”

“Oregon is blessed with many good fishing guides, a few of whom have even been around as long as John Krauthoefer. Fewer yet offer John’s combination of immaculate, seaworthy boat and equipment, a 24-7 sense of safety, glib, articulate personality and, best of all, his unheralded and incredible success rate for clients. And only a handful concentrate all of their effort on their home turf, in this case the north Oregon Coast, offshore, inshore, rivers and bays.

John has never been one to toot his own horn (another plus, by the way), so I’m honored to join his brass band.”

“I’ve made my full-time living in the Sportfishing industry for 30 years.  Over that time, I’ve worked as a guide, tournament fisherman, TV show host, industry lobbyist and now represent the top tackle and fishing equipment companies in the business through my advertising agency.  Having fished with over 200 different guides I can say, unconditionally, that John Krauthoefer is truly, one of the best.

John is a guides-guide.  He has a gift of catching fish when other guides are scratching their heads.  John’s an expert boater, has a sterling safety record, uses only the best gear and is a complete pleasure to fish with.  He makes you feel at home from the time you step into the boat and never lets down giving 110% each and every trip.  For that, John has earned my admiration, respect and highest recommendation.

If you’re looking for a guided fishing trip you’ll do no better than John Krauthoefer. “

“I have known and fished with John for years.  John is, bar none, the best herring fisherman in Oregon.  One story comes to mind:  We booked a trip for Tillamook and tried the jaws, but the weather was heavy and blew us off.  John then took us up to the Oyster House, where by tradition only spinners are pulled.  John rigged us up with herring, and mentioned that he had not done herring in that stretch before, but he did not know why it would not work.  We got several jeers and good natured insults from the spinner guides that day, but they grew silent when John limited the boat out by mid-afternoon.  If you want to catch a salmon on a herring, call John.  He does other types of fishing well, too!

Two stories about safety:  I did a pratt fall the day before a trip, and showed up on crutches and a cast.  John asked me what happened, and then, being the firefighter paramedic that he is, threw me into a fireman’s carry and plunked me safely in the boat.   Another more serous story:  we were just outside the jaws of Tillamook, and boats were streaming around the south jetty.  I asked if he would take me there.  He said no, because it was too dangerous.  I did not ask for a further explanation.  About an hour later, he stiffened while gazing at the horizon.  I asked what was up, and he said to look at the dark line on the horizon.  It is going to be trouble.

About an hour later, a very large sneak wave took us up and up, and then down and down.  We were fine where we were fishing, but three boats were rolled in shallows around the jetty by that wave.  I am a safety conscious boater, and I am totally impressed with John’s seamanship, boating knowledge, and safety.  And, we also limited out that day, after that big wave.”

“I have never fished with a guide who worked harder at getting fish for his clients.  John is the first one on the water in the mornings, and, if necessary, the last one off the water at the end of the day.  He is tremendously experienced and knowledgeable in all aspects of fishing the Columbia, the North Coast rivers, Tillamook Bay, and even the ocean.

John is truly a premier fishing guide.  I would highly recommend him to anyone who wants to catch fish.”

“Having grown up in Coos Bay and “pounding” the river banks of the North Fork Nehalem, Trask and Wilson for 30 years, I was blessed when my friend, Grant McOmie “hooked” me up with John Krauthoefer.

My immediate feeling was one of trust and friendship in a man who loves the outdoors and fishing the N.W. rivers, bays, and estuaries as I do.

John is a master guide to good fishing, friendships, and wonderful memories.” 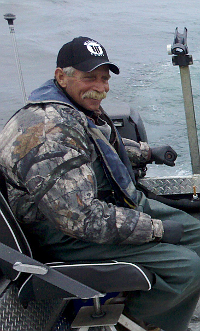